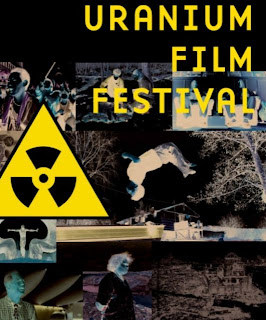 If I could snap my fingers and be in Berlin this October 4th through the 12th, I'd love to attend this remarkable Brazil-based international event:

Uranium Film Festival is a project of the Yellow Archives, a cultural and educational organization that hopes to increase public information about nuclear power, nuclear waste, uranium mining and radioactivity in general. Yellow Archives is the first-ever film library in Brazil and Latin America dedicated to non-profit, educational and research films about the nuclear fuel chain and radioactivity, and makes its archives open to schools, universities and other non-profit organizations. Among the films to be screened are Roberto Pires' riveting Cesio-137: El Pesadelo de Goiânia (Cesium-137: The Nightmare of Goiânia), the 2011 Audience Award winner for Best Feature Film, and Bill Kiesling's 2012 "Yellow Oscar"-winning documentary, "Not for Public Release: a Nuclear Incident in Lock Haven."

The next Uranium Film Festival is scheduled for May 2013 at Rio de Janeiro's Museum of Modern Art. The Uranium Film Festival and the Yellow Archives depend primarily on private funding for their work; you can get involved by becoming a sponsor, or by making a donation to the film festival. The full program of the upcoming October event in Berlin is available here [PDF], and you can also view the program brochure of the 1st Uranium Film Festival from 2011.
Posted by Lenka Reznicek at Monday, September 24, 2012