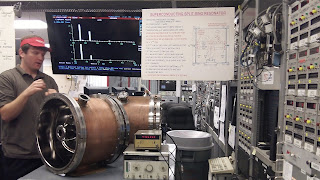 As promised, Part Two of our coverage of the Saturday, September 15th Argonne Energy Showcase open house event. Our video highlights can be seen in the first installment of our Energy Showcase posts. Here's our full Flickr slideshow of over 50 photos with captions. Top: "Now, That's Cold!" Argonne researcher explains the technology behind the ATLAS (Argonne Tandem Linac Accelerator System) facility, the world's first superconducting linear accelerator for heavy ions. The object on the table is a model section of ATLAS' "superconducting split-ring resonator." 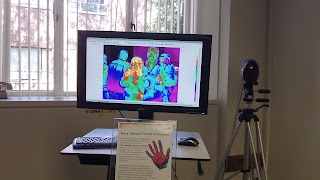 Center: "Hot or Not?" This very popular FLIR imaging exhibit in the Nuclear Energy building allowed visitors to see live video of themselves in the room with color-coded temperature gradients. As you can see, some people are literally hotter than others. A similar station set up in the Advanced Photon Source (401) complex let visitors take home a snapshot printout of their FLIR scans. 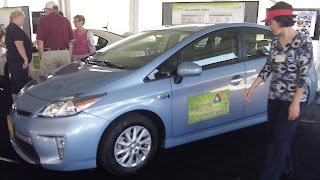 Bottom: "Clean and Green" One of the several advanced hybrid electric vehicles in the Sustainable Energy Tent. Some of the other new technologies on display were demonstrations of biofuel generation using fermented waste, vehicle charging stations, and an area where visitors could ride the "Energy Bike" to see how much pedaling they have to do to light up a conventional incandescent light bulb, versus the effort needed to make LED and compact fluorescent devices glow. As we can vouch, it takes a lot less legwork to make those clean and green LED's shine!
Posted by Lenka Reznicek at Wednesday, September 19, 2012