Researchers at Penn State and Idaho National Laboratory have announced an important breakthrough in sensor technology that promises to improve operating safety and control of reactors in the event of total power failure: 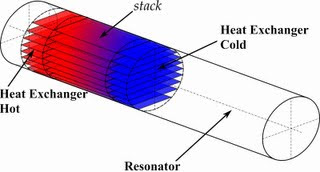 Penn State researchers [have] teamed with the Idaho National Laboratory to create a self-powered sensor capable of harnessing heat from nuclear reactors' harsh operating environments to transmit data without electronic networks. The team [are presenting] their research at the Acoustical Society of America's...164th Meeting, October 22-26, 2012, in Kansas City, Missouri.

"Thermoacoustics exploits the interaction between heat and sound waves," explains Randall A. Ali, a graduate student studying acoustics at Penn State. "Thermoacoustic sensors can operate without moving parts and don't require external power if a heat source, such as fuel in a nuclear reactor, is available."

In the unlikely (but not unprecedented) event of complete power failure, as occurred when backup generators at Fukushima were flooded with seawater following the earthquake and tsunami of 11 March 2011, these self-powered sensors would allow plant operators to continue monitoring conditions within the reactor in the critical first minutes and hours of an emergency.
Posted by Lenka Reznicek at Wednesday, October 24, 2012