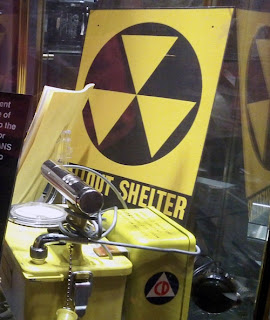 Didn't get a chance to visit Argonne National Laboratory's 2012 Energy Showcase in the Chicago suburbs this past September 15th? Don't worry: we're very happy to share our video and photo highlights from this rare opportunity to peek inside the birthplace of modern nuclear science, and see first-hand some of the amazing research being done in America's heartland.

According to an on-site event organizer, this year's open house was the first one held in five years, after tighter security restrictions post-9/11 put National Laboratory open houses on hold. This year's Energy Showcase was also the first to require visitors to pre-register online. While past events had as many as 20,000 visitors each, Energy Showcase 2012 hosted a more modest registered attendance of approximately 2,000* - not necessarily a downside if you were seeking a good, close look at the dozens of fascinating exhibits on hand. [*According to another person I spoke to later, the registration attendance was capped at 10,000, so I may have misheard the original attendance estimate. If any readers out there have more solid attendance stats, please let us know in the comments! - LR]

First, let's stop in at the Physics building to have a look at the Gammasphere, the world's most powerful spectrometer for nuclear structure research. If the Gammasphere looks familiar, you may remember that the device had a 'guest starring role' in the 2003 feature film "Hulk," as the contraption that triggered Bruce Banner's verdant transformation - back then, it was physically located at Lawrence Berkeley National Laboratory. Read more at http://www.phy.anl.gov/gammasphere/index.html

Next, let's take a short drive south to the nearby Advanced Photon Source complex, a facility which provides the brightest x-ray beams in the Western Hemisphere to more than 5,000 scientists from around the United States and the world. Here's a panned view from the APS observation gallery, as a researcher gives a basic explanation of its workings in the final 30 seconds or so of the video. In person, the building and equipment are remarkably large; what you see here on the video is only a tiny fraction of the APS accelerator "ring." More at http://aps.anl.gov/About/APS_Overview/

Here is a live demonstration of a technique called "acoustic levitation" that uses high-frequency (~22kHz) sound waves to suspend small objects like liquid droplets, plastic spheres, and popcorn in mid-air. Bystanders could manipulate and rearrange the plastic beads within the sound column using a metal spoon, creating intriguing patterns. As you can see from the video, the column behaves as though the beads are 'magnetically' attracted along an invisible vertical line running between the upper and lower sound generators. The demonstrators explain that the beads are spaced at wavelength node intervals of about one-third inch, allowing visualization of the standing wave. More at http://www.anl.gov/articles/no-magic-show-real-world-levitation-inspire-better-pharmaceuticals

Down the hall, we stopped by to see an X-ray diffraction demonstration, which provides a simulation of how the APS' powerful X-ray beam can reveal the before-unseen inner structures of nanoparticles, proteins, crystalline structures, organic molecules, and many other materials. More at http://aps.anl.gov/

In part 2 of our look inside Argonne National Laboratory, we'll visit ANL's Nuclear Museum, home of many historical treasures from the dawn of the Atomic Age.
Posted by Lenka Reznicek at Tuesday, September 18, 2012