The International Uranium Film Festival makes a stop at the Navajo Nation Museum in Window Rock, Arizona this December 2nd through the 4th, bringing three days of insightful documentaries that reveal stories of many First Nations and aboriginal peoples worldwide whose historical lands have been used for radioactive minerals mining and nuclear waste disposal - often with little regard for the health, safety, and security of the communities involved. The Southwestern United States was an epicenter of wartime and peacetime uranium mining from the Cold War onwards; the Navajo Nation only one of sadly many who have suffered its lasting ill consequences.

The [International Uranium Film Festival] is the world's only traveling film festival devoted to the entire Nuclear Fuel Chain, from uranium mining to uranium tailings and nuclear waste, from Hiroshima to Fukushima and Fallujah.

The festival will make its way from Albuquerque (Nov. 27-28) to Santa Fe (Nov. 30-Dec. 1), to Window Rock and finally to Washington D.C. and New York City in early 2014. The founder of the IUFF, Norbert G. Suchanek of Germany, will be present at each screening along with Executive Director Marcia Gomes de Oliveira of Brazil and various producers and directors of the films. Each screening is organized by a diverse group of volunteers to bring these films to the wide screen.

Because of the tremendous impact uranium mining has had on Diné peoples, while these films are playing in the theatre of the Navajo Nation Museum, there will be several organizations coming together on the side to dialogue about the uranium legacy issues still plaguing the Navajo Nation and the new uranium mining permit applications threatening nearby communities and Sacred Sites. Community groups, residents and allies will meet for the two and a half days at the museum and in the local area. Online video streaming will be available via ustream.com during selected hours of the event.

The film festival's schedule and more details are also available on their Facebook page.
Posted by Lenka Reznicek at Tuesday, November 26, 2013 No comments: 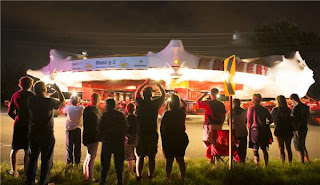 [UPDATE: The Muon g-2 Ring has arrived at Fermilab as of 4:07am Friday morning! Photo at left courtesy of Reider Hahn, as shown on Fermilab's Scribble feed.] After its long journey, the Muon g-2 electromagnet is in its last few miles of the #BigMove, and Fermilab is hosting a public celebration on Friday, July 26 to welcome the Ring's arrival. Fermilab officials released the following:

We're holding a party tomorrow to welcome the ring. If you plan to come, you should read this. Rain and thunderstorms are forecasted for tomorrow evening. The indoor portion of the muon g-2 event will occur regardless of the weather including hands-on science activities in Wilson Hall and scientists available to answer your questions (beginning at 5:30). The ring will move rain or shine and would be delayed only in the event of lightning. Check back here for updates and if you're planning to come out, bring your rain gear.

Naperville, IL Community Television, Channel 17 also featured video coverage of the Ring's arrival in nearby Lemont at http://www.nctv17.com/napervillenews17/article.php?id=2579 [Link via Fermilab]
Posted by Lenka Reznicek at Thursday, July 25, 2013 No comments:

[UPDATE: Storms in the U.S. Northeast region will delay the start of the "Big Move"; details at the Chicago Tribune. The Delaware Online reports,

"Scientists will begin the move next Saturday, taking the magnet from its location on the 5,300-acre Brookhaven campus to the front gate — a distance of about 1.8 miles. The following day, they are expected to move the magnet south along the William Floyd Parkway for 6 miles to Smith Point Park on the Atlantic Ocean. From there, it will be loaded onto a barge and will proceed down the East Coast, around the tip of Florida and up the Mississippi, Illinois and Des Plaines rivers."

Over the next few weeks, you may be fortunate enough to see - but hopefully not be stuck in traffic behind - some eye-poppingly huge particle physics gear traveling down a highway near you. This week, the 50-foot diameter, 15-ton Muon g-2 ("gee minus two") electromagnet was inched out of its current location at Brookhaven National Laboratory on a custom-designed rig, starting a 3200-mile long journey over highways and sea to its new home in Chicago's western suburbs. [Video copyright Emmert International, who are handling the transport logistics of the "big move."]

You can monitor the Muon g-2's progress on this live interactive map, updated every few hours, from the Atlantic seaboard down around the tip of Florida, into the Gulf of Mexico, and finally up through Alabama and several Southern states, through St. Louis, to its final destination at Fermilab in Batavia, Illinois. Why go to such heroic efforts to relocate the Muon g-2? According to Lee Roberts of Boston University, spokesperson for the Muon g-2 experiment,

"It costs about 10 times less to move the magnet from Brookhaven to Illinois than it would to build a new one, so that's what we're going to do. It's an enormous effort from all sides, but it will be worth it."

Fermilab's website explains the details of the project, and the new research capabilities the equipment will provide:

"The muon, like its lighter sibling the electron, acts like a spinning magnet. The parameter known as "g" indicates how strong the magnet is and the rate of its gyration. The value of g is slightly larger than 2, hence the name of the experiment. This difference from 2 is caused by the presence of virtual particles that appear from the vacuum and then quickly disappear into it again....In measuring g-2 with high precision and comparing its value to the theoretical prediction, physicists will discover whether the experiment agrees with theory. Any deviation would point to as yet undiscovered subatomic particles that exist in nature."

More images and videos of the Muon g-2 Project and the "Big Move" can be found at Fermilab
Posted by Lenka Reznicek at Tuesday, June 18, 2013 No comments: 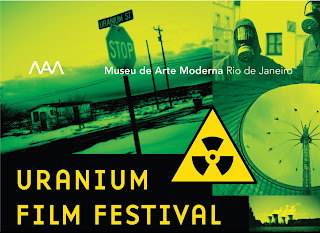 While I haven't yet had the chance to attend one of the touring festivals since their start in 2011, as a former media person with a life-long fascination in all things nuclear, the international Uranium Film Festival holds a very special interest for me. This past Sunday, May 26th capped nine days of film and documentary showings in Rio with the "Yellow Oscar" awards, celebrating offerings of exceptional merit. From the Uranium Film Festival's "Art and Awareness" website section,

[The festival] was founded in 2011 in Santa Teresa, the famous artist quarter in the heart of Rio de Janeiro. The aim of the festival is to inform the public, from a neutral position, about nuclear power, uranium mining, nuclear weapons and the health effects of radioactivity. The horror of atomic bombs and those who suffered from them, and nuclear accidents like Chernobyl or Fukushima should never be forgotten - nor repeated. The correlation between nuclear energy and weapons must be openly discussed. The festival inspires discourse about the health and environmental risks of radioactive materials and waste. We seek to educate and activate the public on these issues. The dynamic media of film is an important tool to bring that information to a diverse international public.

Among this year's Yellow Oscar winners is Nuclear Savage: The Islands of Secret Project 4.1, a documentary by Adam Jonas Horowitz on the devastating effects of U.S. Cold-War nuclear testing on residents of the Marshall Islands, including government footage of nuclear tests and interviews with residents of nearby Rongelap Atoll,which was never evacuated before the March 1954 "Bravo" test - America's largest-ever atomic test explosion, a thousand times more powerful than Hiroshima.

Learn more about the Uranium Film Festival and upcoming events at uraniumfilmfestival.org.
Posted by Lenka Reznicek at Friday, May 31, 2013 No comments: