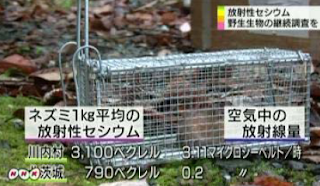 This story from Japan illustrates how radioactive contamination can be dispersed by animal vectors, as well as weather, water, and human intervention: NHK News reports cesium has been found in the brains of wild rats in the forested area about 30km from the beleaguered Fukushima Daiichi nuclear plant.

Apodemus speciosus is actually a species called the Large Japanese Field Mouse, so I'm uncertain if the article is referring to both rats and mice, or just the Large Japanese Field Mice. The linked NHK News article contains a 1:37 video (in Japanese) which may provide a more detailed explanation. Judging from size alone, the rodents shown captured in the video look to be A. speciosus, not the typical species of domestic rat common in Japan.

Radioactive cesium in the 3100 Becquerels [range] was detected in rats in the wild, captured in the forest approximately 30 km from [the] nuclear power plants. An expert at Fukushima Daiichi Tokyo Electric Power Company [said] there is a need to examine continuously the impact on wildlife.

...Apodemus speciosus was captured wild in October and December last year in the forest. As a result of examining the concentration of radioactive cesium accumulated in the body of 12 mice...on average, per kilogram, from rats captured in the village of Kawauchi [measured at] 3,100 becquerels, in Kitaibaraki 790 becquerels has been detected.

Radiation dose in the air of the capture location, Kawauchi village, is in the [range of] 0.2 μSv - 3.11 μSv per hour, and [in] Kitaibaraki, where radiation dose is high, [there was a tendency to find] higher concentrations of radioactive materials in the rat[s]. The results of the survey, Yoshihisa Kubota, Sub-Leader of the National Institute of Radiological Sciences, [indicate] "There is a need to examine ... rats to study the effects of radiation to the same extent as human animals, continue to impact on wildlife of radioactive material."

Linked below are a few studies that may give an idea of how radiation spread by animal vectors like rats contributes to environmental contamination: when contaminated vectors are consumed by predators, if vector and subsequent predator wastes contain appreciable radioactive contamination, and also, if vectors die naturally, how much contamination is left in the soil, landfills, etc. According to one of the articles linked below, larger wildlife like deer pose a greater risk due to their larger body size, wider habitat range, and longer lifespan. Rats in particular would be a particularly important vector to study, given their affinity for human dwellings and garbage dumps. Please note that academic or library access may be needed to access the linked journal papers.[Image from video screen capture from the story on NHK news.]
Posted by Lenka Reznicek at Friday, May 18, 2012