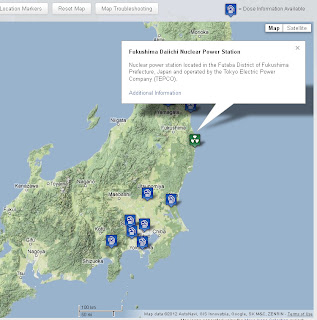 The Pentagon has released data showing radiation dosage estimates for the thousands of American nationals and military personnel in Japan at the time of the 2011 earthquake and tsunami and subsequent nuclear crisis at Fukushima. Named Operation Tomodachi, the registry seeks to "[provide] interested individuals with location-based radiation dose estimates for adults and children for the period of greatest potential exposure, from March 12, 2011 through May 11, 2011." According to the September 5th news report in Reuters,

"[T]he highest rate of adult exposure [was] at Camp Sendai, just north of Fukushima, where the estimated adult dose of whole body radiation was 0.12 rem and 1.20 for the thyroid - the organ most affected by radiation. By comparison, a full-body CAT scan yields a whole body exposure of 5.0 rem. Those American personnel who were stationed at Camp Sendai who check the website will see a message saying: 'Your whole-body and thyroid radiation dose estimates are well below levels associated with adverse medical conditions.'"

The Google API-based map [accessible here], which shows selected measurement areas with links to dosage estimate reports, is expected to be completed by the end of 2012, and will also incorporate dosage estimates and data for about 8,000 individuals who had direct radiation measurements taken.