18th Anniversary of the Chernobyl Disaster 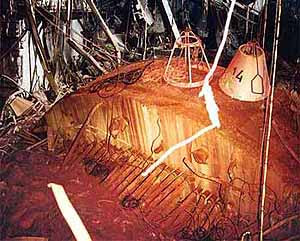 They say there are no coincidences in life.

Today - on the precise anniversary of the Chernobyl disaster - I received my first completely trashed Amazon.com shipment (which I returned tout suite). I ordered VHS tapes of two ABC Nightline special reports on the incident: Chernobyl Nuclear Disaster (aired April 28th, 1986, when the West first heard of the reactor accident) and Chernobyl Plant - The Aftermath (aired April 22, 1987). Since I didn't pay Chernobyl much mind in 1986, I thought the archival program footage would be fascinating (seeing a young Ted Koppel is always good for a chuckle).

I'm sure it will be when the replacements arrive. The shipment I received today appeared to have been either run over by a car or stepped on by Ruben Studdard: the box was accordioned into a hourglass shape, and I knew it was bad news when I shook it like a Christmas present. Rattle, rattle, ching. The tapes inside were literally smashed into black plastic shards. Sigh. Neeeeext! We'll see if Amazon holds to their reportedly strong returns policy.

And, the news breaks that the Vermont Yankee nuclear power station in my old neck of the woods "lost" two pieces of highly radioactive spent-fuel rod:

From USA Today:
The operators of the Vermont Yankee nuclear power plant reported the missing pieces Wednesday, saying they were not where they were supposed to be in the large pool used to store fuel rods. One of the missing pieces is about the size of a pencil. The other is about as thick but is 17 inches long.

The spent fuel rods are highly radioactive and would be fatal to anyone who came in contact with them without being properly shielded, Nuclear Regulatory Commission spokesman Neil Sheehan said. Spent nuclear fuel could be used by terrorists to construct so-called dirty bombs that would spread deadly radiation with conventional explosives.

"We do not think there is a threat to the public at this point. The great probability is this material is still somewhere in the pool," Sheehan said. The pieces could also have been sent years ago to a testing laboratory or a low-level nuclear waste disposal facility. The pieces were part of a fuel rod that was removed in 1979 from the Vermont Yankee reactor, which is currently shut down for refueling and maintenance.

Burlington, VT's WPTZ-TV today reports that the missing pieces are, well, still missing. I don't live near Burlington these days, but that doesn't make me feel much better. It's like hearing that your downstairs neighbor's pet Black Mamba turned up missing.

So, my research into Chernobyl (which includes scouring the Web and government sites, and the University of Chicago and Harold Washington Libraries) has been slightly delayed. However, for the curious, I have a selection of choice hand-picked links that will provide multi-national insights into the incident, and its continuing aftermath.

If you enjoy government reports and "blue books," visit the World Nuclear Association's Chernobyl page, which includes links to UNSCEAR [United Nations Scientific Committee on the Effects of Atomic Radiation, which published several comprehensive reports on the Chernobyl disaster - many which are available here as free PDF downloads.

Watch This: Chernobyl.co.uk, a UK site which features a link to the BBC's recent 30-minute program [streaming RealPlayer video] on Chernobyl, featuring a look at the history of nuclear power in the former Soviet Union as well as a look inside Ukraine's Exclusion Zone towns. Highly recommended: this program illustrates that the deteriorating reactor site is still an issue of pressing concern through Europe, while it has been all but overshadowed here in the U.S.

Watch This: though the bulk of Chernobyl news coverage occurred before the age of streaming video, the post-date digitized BBC retrospective of the Chernobyl disaster [RealPlayer required] is a wistfully immediate - if lo-res - look back at those fateful days in April 1986.

Ukrainian biker gal (and young scientist) Elena is the Kidd [sic] of Speed: her wildly popular site, Ghost Town, features dozens of startling photos and rueful, blustering commentary from her motorcycle tour through the post-apocalyptic Exclusion Zone in Pripyat': part National Geographic expedition, part Jackass-meets-Evel Knievel. Strange thing is, I'd probably do it too, given the opportunity and a lead X-ray apron - but I'd prefer an enclosed vehicle, like a Bradley.

Have Paris, Rome, and the Caribbean lost their appeal? Been there, done that? How about a guided group tour through Chernobyl? I don't know if it's a legitimate enterprise, but you can apparently book a tour through the Exclusion Zone via Ukrainian Web Chyornobyl' Tour. You get complimentary disposable outerwear and shoes, and a souvenir computerized dosimeter printout that certifies how much radiation you absorbed during your visit.

The Jet Propulsion Laboratory's Pioneer Robot pages, with photos and diagrams of the Red Zone Robotics radiation-hardened explorer robot that will be used to excavate and explore the hot ruin inside the Sarcophagus.

A recent Kazakhstan Kazinform press release from March, 2004, warning that trouble at the Chernobyl Sarcophagus could be imminent.

From a nation that is also highly dependent on nuclear energy, but has thankfully suffered neither a Chernobyl nor a Three Mile Island type incident - the Canadian Nuclear Association's report on Chernobyl.

USGS satellite photos showing changes in the Chernobyl region from 1986 to 1992.

An August, 1986 EPA Bulletin on short-term American response to the Chernobyl disaster.

Gla55pak.com has compiled some unusual Chernobyl images here, and proclaims "I have a sick curiosity - more of an impulse - to be there that night and watch the thing light up. I would gladly take a good dose just to have seen it. It is, after all, like an immense train wreck that I just can't help but see." Also: link to Disenchanted.com's take on the Chernobyl and TMI incidents, called "Fear's just bad for business".

A high-resolution satellite image of the Chernobyl region from the Jet Propulsion Laboratory, suitable for desktop backgrounds.

Some of the best photos of the site I have seen are on the INSP's [International Nuclear Safety Program] Digital Library Website, where you can view over 800 color and black-and-white images, including the one at the top of this post.