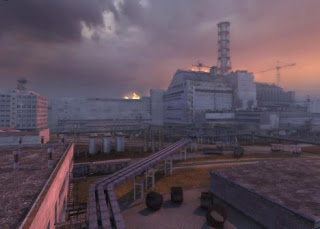 Kiev, Ukraine-based software developers are releasing a science-fiction PC videogame based on the nuclear disaster in Chernobyl, S.T.A.L.K.E.R.: Shadow of Chernobyl:

This grim environmental disaster was one of the most profound tragedies of the past 20 years. Chernobyl still affects the lives of countless Ukrainians, and most people would deem it unsuitable subject matter for a computer game.

The upcoming PC game S.T.A.L.K.E.R.: Shadow of Chernobyl will certainly raise many eyebrows. Set in 2012, it blends science fiction with the shocking events of the past to present a Chernobyl populated by mutant creatures and bizarre phenomena...

Rejecting the inevitable criticism that the game is insensitive, Kiev-based developers GSC say their proximity to Chernobyl ensures that the tragedy still evokes much emotion among the team. They hope the game encourages more people to reflect on the consequences of the disaster.

It is an argument often used by war-game developers, and S.T.A.L.K.E.R. is no less offensive than re-creating D-day, Vietnam or the Battle of Stalingrad in the name of entertainment. Games can be used for political purposes, as the controversial Escape from Woomera demonstrates

If you're into video games, the screenshots look fascinating (click on image above to see the S.T.A.L.K.E.R. gallery), especially in regard to atmospherics.
Posted by Lenka Reznicek at Thursday, June 24, 2004