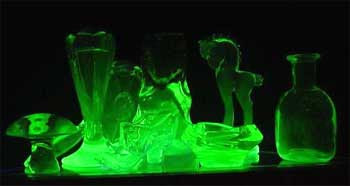 Ever heard of "Vaseline Glass"? It's a type of collectible antique glassware that's usually clear or slightly milky yellow (like the petroleum jelly it's named for) or yellow-green, but its most unusual characteristsic is that it glows brilliantly under ultraviolet light. That's because the distinctive color is produced by the introduction of uranium salts into the glass melt - and yes, it is radioactive...the higher the Geiger counter reading, the more you're guaranteed of its authenticity.

There's apparently a large cult market for uranium glass pieces, which range in age from the 19th century to the 1930's - but none more recent, probably because radioactivity got such a bad reputation following the advent of the Bomb - after World War II, "radiation chic" fell out of vogue. You might be familiar with the story of Fiestaware™ pottery, certain types of which were crafted with a sightly radioactive ceramic glaze - while hard to find, the 'hot' pieces are hot collectibles, fetching high prices.

One UK website that sells Vaseline Glass offers certification of Geiger counter readings, which range from about 300 cps for a small Czech candle-shaped tray, to a blazing 8400 cps for an English 19th Century wine glass. That goblet must have put quite the kick in your nightcap. One piece is listed at a whopping 22,600 counts-per-second, but I hope that's a typo; if it were really that 'hot', you'd probably have to handle it with lead gloves. Still, I'm not too convinced it's a great idea to keep radiant collectibles like this in one's china cupboards, much less actually use them, although some sources say that the actual radiation doses received from these pieces is not harmful.

(The above beautiful image of glowing vaseline glass appears on Webshots.com, photo by tmwalaska.)
Posted by Lenka Reznicek at Tuesday, May 04, 2004