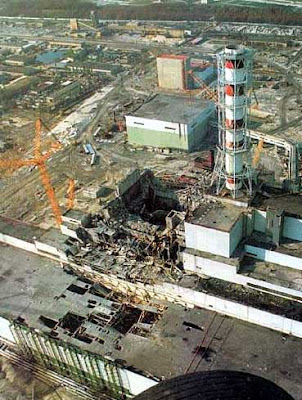 I'm still not certain what triggered it, but this weekend I started thinking about the Chernobyl disaster. True, it's a strange topic to suddenly become interested in, and I can't pinpoint any precipitating cause, such as a news story or random overheard conversation.

Considering that I had a major obsession with nuclear war back in the mid-1980's, I've been rather nuke-phobia-free for the last twenty years or so. The truth is, when Chernobyl's Reactor 4 exploded on April 26th, 1986, I don't remember being horribly concerned or glued to the television for news on the event. This can probably be explained by the fact that I was 18 at the time, and current events were rarely the stuff of daily obsession for me then. I think the zenith of my nuclear paranoia came in 1984 (Coincidence? We think not!), when my high school classes were periodically interrupted with fallout drills and regular lessons on Civil Defense Emergency evacuation procedure.

You see, I lived in Plattsburgh, New York back then - home to Plattsburgh Air Force Base, which was a prominent Northeast strategic ICBM target. What we were all told back then was basically that when the Russkies finally pressed the Big Red Button (of course, it would always be the Russkies pushing the button first), our immediate response should be to duck down under a table or desk, away from glass windows, place our heads protectively between our knees, and kiss our arses goodbye.

Between Ronald Reagan's regularly televised polemics, the "star wars" defense initiative, the Plattsburgh Yellow Pages' obligatory section on Civil Defense evacuation procedures (complete with maps where we should assemble with a change of warm clothing, canned food, jugs of clean water and prescription medications within ten minutes from when we first heard the alarm sirens, preparing to be bussed to safe locations before the Big One hit PAFB in 30 minutes - that's how long it would take the Russkies' ICBM's to strike our little air base) and songs like '99 Red Balloons' by Nena, 'Distant Early Warning' by Rush, 'Dancing With Tears In Our Eyes' by Ultravox (and many others) blaring sweaty repressed fear with a synth-and-guitar backbeat, I had recurring nightmares about nuclear war at least once a week back then.

Every time I heard a fire station call siren, I thought it might be The Big One. It got to the point that when I saw a flash of lightning to the eastern horizon, for a moment my heart skipped and I wondered whether my 30-minute timer had begun.

Sounds crazy, but those were crazy times. Who new that less than two years later, hell would break loose in the Ukraine, with a near-unstoppable radioactive fire spewing toxins into the Northern hemisphere upper atmosphere for nearly two weeks?

Compounding the Chernobyl event's mystery was the Soviet government's complete media silence about the accident for two days, only admitting to the disaster after a Swedish ambassador implored Moscow for answers why incredibly high levels of radiation were being detected in the Scandinavian nation for no apparent reason. Soon images of the reactor inferno reached the outside world, with accounts of brave, desperate virtually unprotected firefighters and helicopter pilots on suicide missions, struggling to put down the graphite moderator fire; the coverage near operatic in its dangerous grandeur and human pathos, a Götterdammerung of man against the mighty Atom unchained.

This past Sunday I heard a dark, minor-key Russian choral hymn on WBEZ, a Chicago classical music station, and in my mind I played over the images of the Chernobyl cataclysm I'd recently seen and read: the juxtaposition made me well up with emotion. Now, for the past few days' I've been researching the entire Chernobyl incident - historical footage and media coverage, and regular updates prepared by regulatory agencies and multinational consortiums, including those who plan to clean up the entombed reactor and rebuild a more permanent protective shield than the hastily-constructed, crumbling Sarcophagus.

I've discovered that the Chernobyl story is far from over: the monster only sleeps. Authorities in the former Soviet Union publicly decried their population's fear of Chernobyl's fallout as "radiophobia," a mass hysteria with no basis in fact. Unfortunately, when authorities are less than candid about the facts, people will try to read between the lines and fill in the blanks, often creating mass panic. Today, a number of nations are scrambling to raise funds to finally contain and clean up the reactor ruin, to dissect its poisonous innards before it wakes, stirred up by seismic activity, weathering, or other events. This project is called the Shelter Implementation Plan, or SIP [PDF file].

Perhaps the recent look back at Chernobyl is no coincidence. Here in Chicago's Hyde Park, just a few yards from where I work, is a large brass Henry Moore sculpture that looks vaguely like a deformed hollow skull, or a mushroom cloud. It stands at the former site of the University of Chicago's Stagg Field, where on December 2, 1942, a researcher named Enrico Fermi created the world's first controlled self-sustaining nuclear reaction. The sculpture is called "Nuclear Energy", and it marks the place where the power of the atom first emerged in the world of man; if not for this event that took place near where I pass every day, there would have been no Hiroshima, no Nagasaki, no Three Mile Island, and no Chernobyl. As Prometheus stole fire from the gods, so Fermi stole the fire of the atomic pile: nuclear energy may certainly have brought some benefits to humankind, but at a rather steep price with compounded interest.

NOTE: The photo at the top of this post is a rare excellent shot of the destroyed reactor after the fire was put out - but before the Sarcophagus was constructed. I found it on the Chernobyl Tour site, where you can apparently book a tour of the area, including stops near the reactor and the neighboring ghost town of Pripyat. Tourists get special disposable clothing and respirators for the trip, and a complimentary computerized souvenir dosimeter reading (unfortunately, I'm not joking). Sorry, no photos allowed by Ukrainian law, which would explain the relative dearth of good images of the accident site available. However, some photos do appear on the Web, mostly from Ukrainian residents who visit the area and some from foreign press visits, which I'll be offering links to in the forthcoming special farkleberries feature on the Chernobyl accident anniversary. April 26th, 1986.

The photoessay site "Ghost Town", created by a young Ukrainian woman named Elena, has received over 2.5 million hits as of this writing; you'll find dozens of startling, one-of-a-kind images of the Chernobyl region accompanied by Elena's account of her visit. While access is strictly limited, Elena states that her father works for the government, and was able to arrange a permit for her motorcycle visit. Thank you, Walt, for this excellent link.

18 years is nothing in the life of a plutonium atom.
Posted by Lenka Reznicek at Tuesday, May 04, 2004