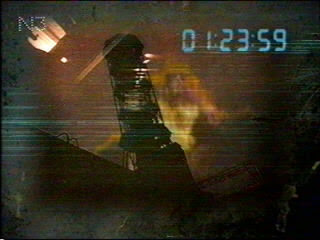 My search for information on Chernobyl has taken me to some very strange places.

This morning, I found this image on a fascinating Italian Chernobyl website, The Humus Project, or Progetto Humus, at http://www.progettohumus.it [the page this image appears on is here]. Look closely.

I can't verify its authenticity (unfortunately, many of the images lack captions or explanations) but it appears to be a shot of the glowing core of Chernobyl Reactor 4 shortly after the explosion. The timestamp on the image reads 01:23:59. But is it 1:23:59 AM on April 26th, 1986?

Thinkquest Library states that the containment lid of Reactor 4 blew off at 01:23:44 am, while the German 'Society for Plants and Reactor Safety', GRS (Gesellschaft für Anlagen und Reaktorsicherheit, in their technical report "The Accident and Safety of RBMK Reactors" [5Mb PDF file]) places the time of the explosion at:

Recording of the shift supervisor: "Strong impacts, the shutdown systems stop before reaching the lower end position ..." Reactor excursion with more than 100 times of the nominal power. Explosion and destruction of the reactor core. The upper plate of the reactor is hurled up, all pressure tubes break off. Core material and burninggraphite parts are ejected. The reactor is burning, further fires start in the surrounding. Massive release of radioactive fission products.

If this photo is genuine, then it would be the first time I've been able to track down an image of the reactor in the earliest stages of the accident. I have not yet found an image of this type anywhere in Chernobyl literature, either on video, in books or and other source. Where did this come from, considering that the former Soviet Union did not inform the outside world of the explosion until days later? Was there a camera trained on the reactor? Did the image come from a flight over the reactor later than the timestamp indicates?