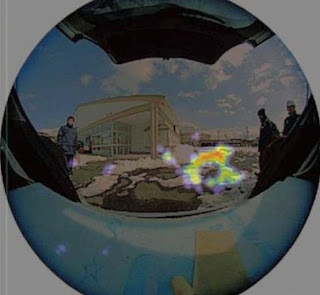 Mitubishi Heavy Industries, Ltd. of Japan announced it will begin marketing early next year the Astrocam 7000 HS, a new type of video camera that can show a superimposed display of radioactivity on its wide-angle 180-degree image, allowing cleanup crews and emergency responders to see "hot spots" in real time. The Asahi Shimbun reports,

"The portable camera, which will apply technology jointly developed with the Japan Aerospace Exploration Agency (JAXA), is designed to allow for more efficient clean-up of radioactive contamination, an issue of great concern in Japan because of the nuclear disaster last year. The camera will use technology now in place on observation equipment aboard the ASTRO-H X-ray astronomy satellite operated by JAXA.

Tadayuki Takahashi, a professor of space physics at JAXA and project manager of the ASTRO-X, said, "The camera can measure radiation in high places, such as on roofs, and will lead to more efficient decontamination of radiation." Using two types of semiconductor sensors, the direction and strength of gamma rays emitted by radioactive materials such as cesium are measured and brought to light as a superimposed image on the visible landscape." 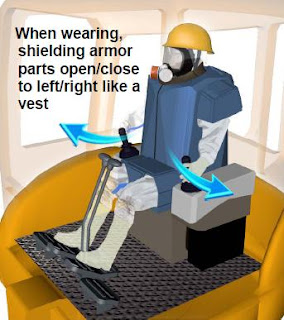 Mitsubishi this week also announced another breakthrough in nuclear cleanup technology, an armored seat that would reduce heavy equipment operators' exposure to radiation by half, and theoretically allow workers to remain twice as long in hazardous areas before receiving maximum permitted radiation doses:

The seat material, including body armor parts (shoulders, arms, chest/abdominal area, thighs, neck), consists mainly of tungsten sheet, which offers excellent radiation shielding capability. Although the seat weighs a considerable 130 kilograms (kg), individual parts weigh less than 20kg and most of their weight is integrally supported by the seat, so the burden on the operator is minimal.

In addition, the operator can put on and remove the armor-like parts easily by opening/closing the front like a vest...these features provide a high rate of radiation shielding while simultaneously minimizing fatigue during continuous work and inconvenience to machine operation from wearing such shielding.

Here, Mitsubishi Heavy Industries demonstrates the Astrocam and explains its technology in this one-hour press conference video (in Japanese, no subtitles).