Any of you Midwestern folks out there have a funny feeling last week? You know, that something might have fallen out of the sky? Nope, no reason. Just askin'. From WIRED News: 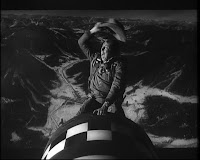 WASHINGTON (AP) -- A B-52 bomber was mistakenly armed with six nuclear warheads and flown for more than three hours across several states last week, prompting an Air Force investigation and the firing of one commander, Pentagon officials said Wednesday. The incident was so serious that President Bush and Defense Secretary Robert Gates were quickly informed and Gates has asked for daily briefings on the Air Force probe, said Defense Department press secretary Geoff Morrell. He said, "At no time was the public in danger."

Rep. Ike Skelton, chairman of the House Armed Services Committee, called the mishandling of the weapons "deeply disturbing" and said the committee would press the military for details. Rep. Edward J. Markey, a senior member of the Homeland Security committee, said it was "absolutely inexcusable. Nothing like this has ever been reported before and we have been assured for decades that it was impossible." ...

The plane was carrying Advanced Cruise Missiles from Minot Air Force Base, N.D, to Barksdale Air Force Base, La., on Aug. 30, said the officials, who spoke on condition of anonymity because of a Defense Department policy not to confirm information on nuclear weapons. The missiles, which are being decommissioned, were mounted onto pylons on the bomber's wings and it is unclear why the warheads had not been removed beforehand.

This reminds me of an apocryphal story/urban legend I once heard regarding a nuclear near-catastrophe that supposedly occurred at Plattsburgh Air (NY) Force Base - once a strategic missile site - in the late 1980's, where a technician accidentally armed an ICBM warhead during routine maintenance. Allegedly, the error was discovered and corrected only minutes before the warhead was set to detonate.

I haven't found any independent evidence to corroborate the story, but it still gives me the willies to think what might have happened: at the time was living in Plattsburgh, barely a mile from the facility.
Posted by Lenka Reznicek at Wednesday, September 05, 2007