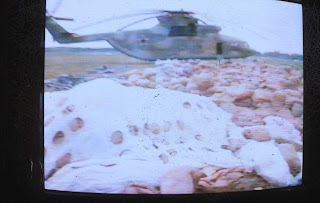 Were there any other kind? This striking film footage (taken by the late Vladimir Shevchenko, who died of radiation exposure soon after this film was made) was posted to YouTube several years ago, but as we approach the anniversary of the Chernobyl accident, these images show the stunning disregard for radiation protection given to the first responders and "liquidators." They dig, film, and cart away searingly radioactive debris using only conventional work gloves, cloth facemasks, and construction respirators, seemingly unaware or dismissive of the immediate danger they face. Some later web versions of Shevchenko's film have background music added, but I think this silent version with supertitles conveys its potent message best.