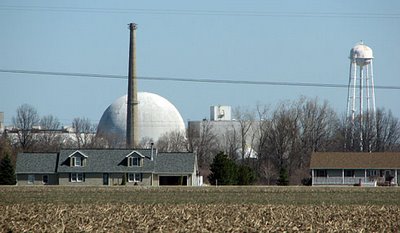 I'd like to call on the expertise of RadioActive! readers to help me identify this power plant. This photo was taken Tuesday 4/4/06 from interstate highway 80-90 in northern Ohio roughly near Toledo, where the highway parallels state route 2. I think it is a nuclear reactor (judging from the containment structure), but it does not resemble either of Ohio's two reactors on the NRC list, the Davis-Besse or Perry power plants. Any suggestions and clues would be appreciated.

By the way, check out the Google Maps satellite image of Perry, Ohio. On my computer, the grid area directly corresponding to the Perry nuclear facility is blurred/smeared. Is this an intentional censoring of the image for security reasons, I wonder?

UPDATE: The Google Maps image of The Davis-Besse facility, however, is not blurred.
Posted by Lenka Reznicek at Wednesday, April 05, 2006