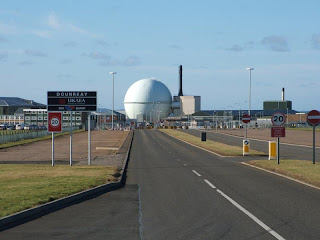 According to the Scottish Environment Protection Agency (SEPA), nuclear fuel particles found on beaches near the defunct [Caithness] Dounreay nuclear facility in Scotland only "pose low-level risk to human health." However, the agency conceded that some pieces of higher-activity fuel rods are still washing up on public beaches. From the Edie News Center:

Fragments of nuclear fuel, which continue to turn up on beaches near the former experimental reactor, prompted SEPA to commission an enquiry into their effects on human health in 1998.

Particles found at the site so far are "relatively low in activity." Visible skin burns could only occur if a person encountered a particle of higher activity, according to the Health Protection Agency (HPA), which carried out the research. It estimated the chances of that happening at one in 80 million.

But the report also warned of particles with a higher radioactivity being brought onto the beach from the seabed. Such particles have not been detected since monitoring began in 1999, however, the researchers said.

The HPA looked more closely at vulnerable groups, such as people walking dogs or digging for bait on the affected beaches, and the time they spent there. It considered the possibility of people accidentally swallowing or inhaling the particles, or sand from the beach being used for children's sandpits.