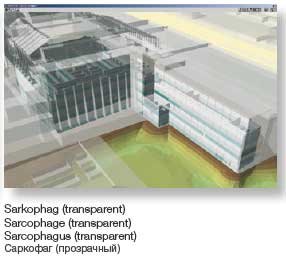 The free 70-page color booklet contains narrative in French, German, English and Russian; along with photos of the damaged reactor and the surrounding area, detailed accounts of the damage and radiation released in the 1986 accident, and current plans for abating and controlling the deterioration of the current "shell" surrounding Reactor 4.

What's new and quite interesting here are recent ArcView GIS [Geographic Information System] and computer-generated 3D maps of the site, many which include environmental radiation level isosurfaces (example from the GRS/IRSN 2005 report shown). 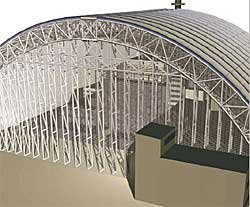 According to the SIP [Shelter Implementation Plan], the goal of building the aluminum semicircular housing is "to safely confine the radioactive materials for at least 100 years and...to allow their retrieval from inside if need be as well as the dismantling of the old structure."
Posted by Lenka Reznicek at Tuesday, April 18, 2006