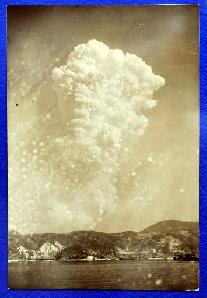 Over 20 years ago, the Hiroshima newspaper Chugoku Shimbun sent a team of reporters to 15 nations around the world to gather personal accounts of people affected by radiation - from reactor accidents, accidental contamination, to nuclear weapons manufacturing and testing. The interviews were initially published as a series of eight newspaper features titled "Sekai no Hibakusha," or "Hibakusha (figuratively, "atomic bomb survivors") Around the World." This monumental series won a Japan Newspaper Publishers and Editors Association award in 1990, and was subsequently published in book form the following year. Executive Director of the Chugoku Shimbun Yukio Ogata explains,

"Largely as a result of the articles' success in bringing the public's attention to the dangers of radiation, a number of victims of radioactive contamination from areas as far-flung as Chernobyl and Bikini Atoll were able to participate in the world convention held in Hiroshima by the International Physicians for the Prevention of Nuclear War in October 1989...[T]he convention heard details concerning the damage caused by nuclear testing in Kazakhstan, which until then had been shrouded in secrecy. In turn, this disclosure of widespread destruction of the environment prompted the Chugoku Shimbun to instigate the first-ever investigation of the testing area.

In March 2013, the Hiroshima Peace Media Center re-released the entire series of 134 interviews free online as "EXPOSURE: Victims of Radiation Speak Out". From the English-language introduction by Dr. Robert Jay Lifton, Director of the Center on Violence and Human Survival at the CUNY John Jay College of Criminal Justice notes,

"There is compelling appropriateness in the project's being undertaken by concerned journalists from Hiroshima. From the time the bomb was dropped, the Chugoku Shimbun, as Hiroshima's leading newspaper, has been a prime source of information about the experiences and feelings of the people of that city over subsequent decades. Its editors and writers have taken on what I call a 'survivor mission' on behalf of the city's victims, a commitment to transforming the fear, conflict, and pain of the survivors into an active exploratory enterprise of profound significance.

Their contribution goes even beyond their descriptions of the human effects of radiation. In the way they have approached their study, they have demonstrated what I call a species mentality, a commitment that transcends immediate group or nationality and extends to all of humankind. They evoke in us a sense of shared fate, of universal susceptibility to a technology that knows no boundaries, geographical or temporal. We are all in this together, as potential victims and potential perpetrators as well.

Among the regions and incidents covered in these interviews are Chernobyl, the 1987 Goiânia Accident in Brazil, contamination from the Cold War weapons program at Semipalatinsk, Kazakhstan, and the Hanford Nuclear Reservation site in Washington State.

[Image courtesy Hiroshima Peace Media Center: "The mushroom cloud as seen from Kure, approximately 18 kilometers southeast of Hiroshima. This photo was taken by Masami Oki about 40 minutes after the bomb exploded."]