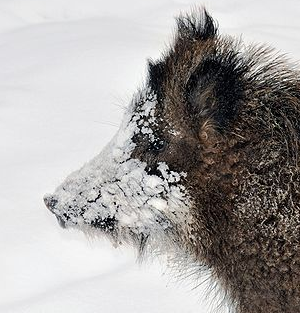 The Italian newspaper Corriere Della Sera reports that traces of cesium-137 contamination have been found in dozens of wild boars taken by hunters in the northern Valsesia [Sesia Valley] forests, in the province of Vercelli.

[27 A]nalyzed samples of [the] tongue and diaphragm of animals slaughtered during the hunting season 2012/2013 [showed] level[s] of Cesium-137 higher than the threshold specified by Regulation 733 of 2008 as the tolerable limit in the event of a nuclear accident. According to the deputy of the Piedmont Region, Roberto Ravello, alarmism should be avoided because the health risks would be "contained and controlled."

According to Elena Fantuzzi, head of the Institute of Radiation Protection ENEA, the most immediate explanation is that the contamination originated from the 1986 Chernobyl accident. However, she cautions, (translation via GoogleTranslate) "[W]e must also consider the nuclear sites in the area, including the central Trino Vercellese ["Enrico Fermi" nuclear plant] dismantled in 1987 and the experimental site Enea, in Saluggia...[We can not exclude] the trail of toxic waste." Gian Piero Godio, a nuclear expert in the Legambiente Piemonte and Val d'Aosta region adds, "[There may be o]ther explanations....the district of Valsesia has no radioactive source[s]." More: Video news story (in Italian)