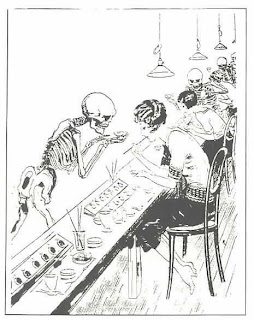 "You'd better find another job," said Mae Keane's boss at the Waterbury Clock Company of Vermont, when her luminous dial-painting productivity flagged. Mae thought the radium paint was too bitter-tasting, so she refused to use her colleagues' "lip-pointing" technique to create a sharp tip on her paintbrush by placing it in her mouth.

This bit of insubordination may have cost her a well-paid (a reported 8 cents per dial; about $1.00 today) summer factory job in 1926, but it probably saved her life. Back then, Mae's workplace friend Elsie gave her some frightening advice: never have a tooth pulled, because the wound would never heal.

"It was kept a secret in my young age and we didn't know what it was all about," Keane said. "People were dying and we didn't know why." Despite a history of health difficulties likely linked to her radiation exposure as a young woman, 105-year old Ms. Keane is the last surviving "Radium Girl."

For years, Middlebury, Vermont high school freshman Tim Cohn had been interested in his aunt Mae's accounts of working at the Waterbury Clock Company. Now Cohn's research on his aunt, her experiences, and the attempt to cover up what happened to the Radium Girls have made him a finalist in the National History Day contest, to be held at the University of Maryland in College Park, Md. this June 10-14. Congratulations, Tim - and best wishes to your aunt Mae!

Here is a small sampling of links dedicated to the remarkable Radium Girls story; not just those who worked at the Waterbury plant, but those at locations around the nation in the 1920's and 30's. [Image from Hearst Sunday supplement American Weekly, February 28, 1926]
Posted by Lenka Reznicek at Monday, May 14, 2012