[Image and YouTube video from the NNSA. Thanks to James Stover (tweeting at @JamesStoverAPR) for the story!]

Yesterday, in the Nevada desert, demolition crews from New York and Maryland felled a legendary piece of America's atomic history.

At 1,527 feet tall, the former Nevada Test Site's BREN tower was the "tallest free-standing structure west of the Mississippi River," and also the "tallest structure of its kind ever demolished," according to the National Nuclear Safety Administration. Originally built in 1962 in Yucca Flats, from fifty-one 30-foot sections of steel and two and a half miles of steel cable, the tower was moved to its latest location in Jackass Flats in 1966 after the Nuclear Test Ban Treaty banned open-air nuclear testing. 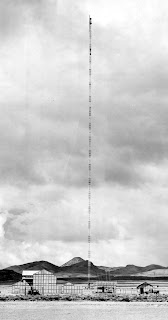 From CNN: The tower stood taller than the Empire State Building (1,454 feet) and the Eiffel Tower (1,063 feet). It was also taller than the iconic Stratosphere (1,148 feet) on the Las Vegas strip...[T]he BREN Tower took its name from the nuclear radiation experiment for which it was built: Bare Reactor Experiment - Nevada. BREN Tower was designed to provide a way for scientists to accurately estimate radiation doses received by survivors of the atomic bombs detonated over the Japanese cities of Hiroshima and Nagasaki during World War II. The tower stood 1,527 feet tall because that was the height at which "Little Boy," the first atomic bomb used in warfare, was detonated over Hiroshima on August 6, 1945.

At one time, a mock Japanese village was built near the tower's base to give researchers better modeling of the effects of a nuclear explosion on inhabited areas. Officials from the NNSA said the tower, which stopped being used in 1999, was too costly to maintain and restore, and posed a hazard to passing aircraft.
Posted by Lenka Reznicek at Thursday, May 24, 2012