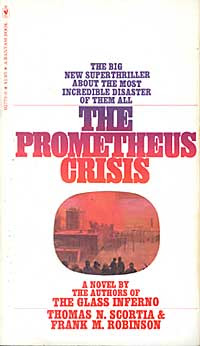 From the frontispiece of this creepy summertime read (out of print, but not too hard to find used):

"...another angel approached me.

This one was quietly but appropriately dressed in cellophane, synthetic rubber and stainless steel, but his mask was the blind mask of Ares, snouted for gasmasks. He was neither soldier, sailor, farmer, dictator or munitions-manufacturer. Nor did he have much conversation except to say,

Switching dramatically between post-disaster government hearings and the events leading up to it, this fictionalized scenario set at "the world's largest nuclear plant in California" has an exceptional sense of pacing, drawing the reader into a tense technological page-turner not unlike Michael Crichton's The Andromeda Strain (1971). The Prometheus Crisis predates Three Mile Island by four years, and Chernobyl by eleven, and presciently foretells the tangled bureaucratic nightmare that occured along with the public panic in the real world of TMI and Chernobyl.
Posted by Lenka Reznicek at Thursday, June 24, 2004