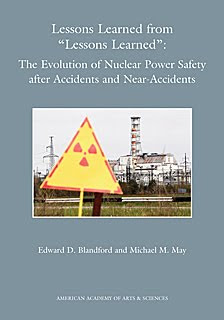 Continuing our theme of our evolving understanding of nuclear power safety, I'd like to highlight an excellent - and timely - paper just released by the American Academy of Arts and Sciences, "Lessons Learned from 'Lessons Learned': The Evolution of Nuclear Power Safety after Accidents and Near-Accidents," by Edward D. Blandford and Michael M. May. From the preface:

"As countries struggle to meet the electricity demands of their growing populations while also reducing their carbon footprints, many have turned to nuclear energy. The U.S. nuclear energy program may not increase significantly in the coming decades, but other countries, including many developing countries, have plans for rapid expansion. Even after the recent accident at the Fukushima Daiichi Nuclear Power Plant in Japan, the global trend toward expansion of nuclear energy has continued.

While serious accidents like Fukushima, Three Mile Island, and Chernobyl can provide invaluable lessons, the nuclear industry, nuclear regulators, and the research community must study minor incidents and near-accidents as well. These experiences often reveal not only how to decrease the likelihood that the same mistakes will occur, but also how to avoid larger accidents that may be foreshadowed in earlier, smaller incidents.

In this paper, Edward Blandford and Michael May enumerate the lessons from nuclear accidents and incidents, asking whether the nuclear energy community has indeed learned from those lessons. The authors argue that stakeholders must commit to ongoing improvement of their protocols and standards. Each nuclear incident—no matter its size—underlines the importance of pursuing high standards of safety, security, and proliferation resistance."

One standout key finding in "Lessons Learned..." is on page 23, in Table 1, "Main Sources of Electricity in the World and Their Morbidity and Greenhouse Gas Emissions Per Unit of Electricity Produced." The authors find that while nuclear energy is the fourth most prevalent form of electricity generation worldwide (at 14% of global usage), it is associated with the lowest number of deaths per terawatt hour (0.04). The least common form of generation, wind power (< 1% of global usage), somewhat surprisingly has a morbidity rate of 0.15 deaths per terawatt hour, but I suspect many of these might be a result of accidents involving installation or maintenance of the wind turbines, rather than the operating process itself.

If you're pressed for time, the paper's executive summary provides an informative primer on its conclusions and policy recommendations for the industry. The paper is available as a free PDF download as part of the AAAS' Occasional Papers series at http://www.amacad.org/publications/lessonsLearned.aspx, or as hard copy for a nominal fee from the AAAS.
Posted by Lenka Reznicek at Monday, June 11, 2012