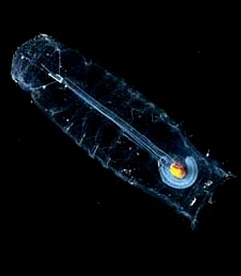 An influx of "thumb-sized" creatures in cooling sea water proved too much for a California nuclear power plant this week, according to NDTV:

The Diablo Canyon nuclear power plant, in San Luis, California, shut down its Unit 2 reactor after sea salp, a planktonic jellyfish-like creature clogged the screens of the plant’s coolant water intake. The influx of the gelatinous animals was discovered Wednesday. Initially, plant operators reduced its functional reactor to 25% capacity. Unit 1 had a scheduled refueling earlier in the week, and had been shut down.

In smaller quantities away from industrial activity, Salps have been known to have a beneficial effect on seawater by consuming bacteria. The San Luis coastal salp invasion may be just a periodic bloom.
Posted by Lenka Reznicek at Friday, April 27, 2012